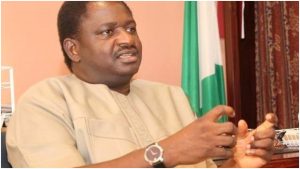 The Omeluenyi I of Agunnese, Ezeani III of Nmaku Kingdom in Enugu, Igwe Cyprain Nevobasi, on Tuesday honoured the Special Adviser to the President on Media and Publicity, Mr. Femi Adesina, with the traditional title of Nwanne Di Na Mba (A brother in another land) Mmaku Kingdom, Enugu State.

Nevobasi conferred the title on Adesina during the 1st Grand Ofala festival of the community.

Justifying the choice of the presidential aide for the title, the traditional ruler said Adesina was honoured because of his passion for the country and his commitment in serving President Muhammadu Buhari.

While thanking the traditional ruler for the honour, Adesina said he accepted the title because it was good for national cohesion, coming outside of his ethnic stock.

“It was completely unsolicited,” he said.

Agunnese Afam Mmaku is one of the three communities that make up Mmaku Kingdom in Awgu Local Government Area of Enugu State.

Adesina had before the commencement of the ceremony visited the palace of the traditional ruler of Obuoffia Awkunanaw in Nkanu West LGA of Enugu State, Igwe Obiorah Igwesi

He assured members of the community that under Buhari’s watch, Nigeria will witness unprecedented development and progress.

“A new foundation is being laid for our economy, social and political life and during the time of President Buhari things will change for the better in Nigeria and we will all experience and be blessed by it,” he said.