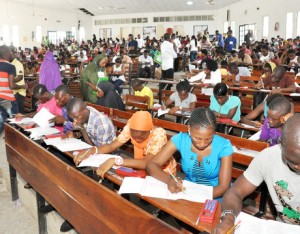 The Federal Government has issued queries to 42 universities for allegedly charging more than the N2,000 instructed by the Federal Ministry of Education to conduct their 2017 post-Unified Tertiary Matriculation Examinations.

This was made known on Tuesday by the Registrar of the Joint Admissions and Matriculation Board, Prof. Is-haq Oloyede, at a stakeholders’ meeting on the 2018 UTME in Abuja.

The JAMB registrar said one of the vice-chancellors who could not trace the affected candidates, was instructed by the Minister of Education, Adamu Adamu, to give the excess to a non-religious orphanage as charity.

Oloyede said, “There are 42 institutions queried by the minister for charging more than N2,000 for the post-UTME. The affected universities are now refunding the excess to the candidates and the candidates are reporting back to us. In one case where the university could not trace the affected students, the minister directed that the money should be paid to a non-religious orphanage.

“The candidates in that case could not be traced for a refund. Hence, the minister has put his feet down that all excess charges should be refunded. Where the universities have the list, they are paying the candidates directly.

“The purpose of this stakeholders’ meeting is to brief those officials who will be on the field for the 2018 UTME. We also reviewed the incidents of 2017 and welcomed recommendations from the stakeholders. The UTME Mock Examination will hold in the first week of February 2018 and the concerned Computer-Based Test centres have been accredited. As we have earlier announced, the UTME will hold from March 9 to 17, 2018.”

Oloyede added that the board had implemented some “new prohibitions” for the 2018 UTME in order to check examination malpractices.

He added“We have prohibited some additional materials during the 2018 UTME in the examination hall. These include wristwatches, biros, calculators, pencils except the HB Pencil, and any other device that can store data, transmit or receive signal no matter the form. These prohibitions are not only applicable to the candidates but also to all examination officials.”

When our correspondent contacted the Federal Ministry of Education, authoritative sources confirmed the queries issued to the 42 universities, but declined to give their identities.

It was learnt that the vice-chancellors of the affected universities had been responding to the queries and refunding the excesses.