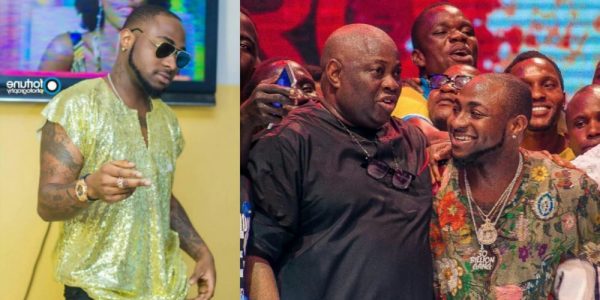 Publisher of the Ovation Magazine Chief Dele Momodu has revealed that clashing with Singer Davido was one of the biggest issues of his life.

The veteran journalist who has had different stages of battles in his life including a period of exile during the General Sani Abacha regime revealed this during a visit to the contestants of the Celebrity House mates.

According to Chief Dele Momodu, it was a very trying period for him which was majorly because of Davido’s popularity.

“It was a very big issue for me, bigger than fighting Abacha because of Davido’s popularity. He’s a very popular guy” he said

He explained that although he tried to avoid the issue considering his closeness to the Adeleke family especially Senator Ademola Adeleke, the issue could not be avoided.

Recall how a messy scandal between Davido and his first baby mama Sophia Momodu who happens to be the niece of Chief Momodu had become a free for all battle resulting into Davido insulting the much older man.

The matter was finally settled amicably with Davido performing at the last Ovation Carol.

2019 former Big Brother Nigeria housemate, Mike Edwards has announced in an Instagram post that he has joined the Budweiser family as a brand...
Read more

Popular Nollywood veteran actress, Rita Dominic has shared new pictures on social media and we are absolutely loving it. The actress who was earlier reported...
Read more

Nollywood actress, Uche Jombo has taken to her official Instagram page to share with her fans what she describes as 'the formula of happiness...
Read more