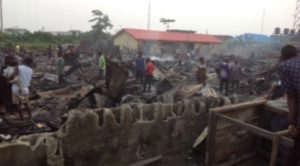 Fire rendered over 300 persons homeless  on Saturday in Yenagoa, the fire started in a neighbourhood in Ekeki suburb of the Bayelsa capital.

The News Agency of Nigeria learns that the inferno, which occurred at about 2am, also destroyed valuables worth millions of naira. The cause of the fire has not been ascertained.

Residents of the affected area located behind the Ekeki Divisional Police Station said they lost to the fire, items such as generators, television sets, bales of fabrics, huge sums of money and phones, among others.

However, no life was lost in the fire mishap.

One of the residents, who gave his name simply as Nicholas, suspected that the fire might have been caused by a candle light as there was no electricity supply when the incident occurred.

He said that firemen who arrived at the scene in three vehicles stopped the fire from spreading to the Ekeki Police Station.

“It happened this morning, some minutes to 2a.m. We have not slept since then till now. Three fire-fighting vehicles came and stopped the fire. If not it could have entered the police station.

“We don’t know what caused the fire. Whether it was candle light, we don’t know. But it started with a little smoke coming out from someone’s house and a woman saw it, but she did not tell anybody.

“One woman lost N300,000 that some persons kept in her custody. Her husband’s money was N120,000. Everything got burnt, one kobo is not remaining,’’ Nicholas said.

He appealed to the Bayelsa government and well-meaning organisations and individuals to come to their aid as they could not salvage their valuables.