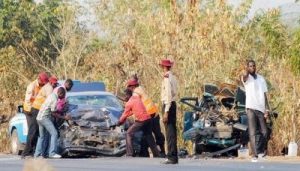 The Federal Road Safety Corps (FRSC ) has  confirmed the death of four persons, while 13 others were injured  in an accident that occurred on Lagos-Ibadan Expressway on Saturday.

Mr Clement Oladele, the Sector Commander of FRSC, said that the accident happened in front of Christopher University at KM 82 at about 7.25 p.m.

Oladele said that two vehicles and 23 people were involved in the mishap that claimed four lives leaving 13 injured.

“The corpses had been deposited at the mortuary at Fakoya Mortuary Sagamu while the injured persons were taken to Broad Life Hospital at Olowotedo and Idera Hospital, Sagamu, for intensive treatment,” he said.

The sector commander advised motorists to be cautious and desist from speeding to ensure safety of lives and property on our roads.