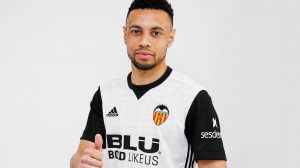 “Valencia have reached an agreement with Arsenal Football Club on Thursday for the transfer of Francis Coquelin, who becomes a new black and white player until June 30, 2022,” the club said in a statement.

The 26-year-old Frenchman moves to Spain for an undisclosed fee with an 80 million euros (96.4 million dollars) buy-out clause attached to his new contract.

“I spoke on the phone, we had a good contact, a good conversation, so I am very happy to be here today,” Coquelin said.

Coquelin joined Arsenal in 2008 and made 160 appearance for the club. Jack Wilshere’s return to the Arsenal team helped limit Coquelin to one Premier League appearance this season. He had been linked to West Ham and Crystal Palace as well as Valencia.

After leaving Coquelin out of Arsenal’s team for Wednesday’s League Cup semi-final first leg draw at Chelsea, Wenger confirmed: “He goes to Valencia. He didn’t get enough games for us this season. He had an opportunity and I let him go.”

The club bade Coquelin farewell on Twitter saying: “We wish Francis well at Valencia and thank him for his contribution to the club.”