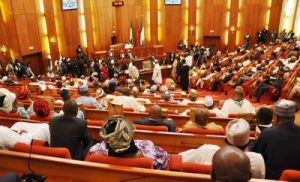 At the ongoing public hearing organised by the Senate on the lingering petrol scarcity, three National President of the Independent Marketers Petroleum Association of Nigeria identified as  Sanusi Fari, Chinedu Okorokwo and Obasi Lawson.

The development which occurred during the introductory session had caused a stir at the event.

The Senate Committee on Petroleum Resources (Downstream) resolved that only Executive Secretary of IPMAN, Aminu Abdulkadir‎, would be recognised to speak for the association.