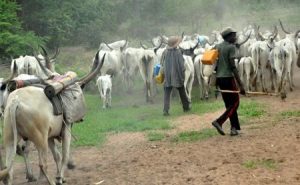 Suspected Fulani herdsmen attacked the farm of a former Secretary to the Government of the Federation, Chief Olu Falae.

The farm is located at Ilado Village in Akure North Local Government Area of Ondo State.

It was gathered that the hoodlums did not steal anything on the farm but burnt down five hectares of the farm which, according to a source, was the oil palm plantation.

Falae was kidnapped in September 2015 by the herdsmen but was released three days later following the intervention of President Muhammadu Buhari who ordered the then Inspector-General of Police, Mr. Solomom Arase (rtd) to secure his release.

He said the extent of the damage could not be ascertained at the time of his conversation with our correspondent.

Raji said, “At about 6pm, I got a message from one of the police officers attached to the farm that the farm has been burnt down by some hoodlums.

“There was no worker on the farm when the incident occurred because it was a Sunday.

“We are on our way to the farm now to know the extent of the damage.

“We have informed the Commissioner of Police. About five hectares of the land were affected.

“The oil palm plantation was affected as well as some parts of the yam and cassava plantations.”

When contacted, the Police Public Relations Officer in the state, Mr. Femi Joseph, said he was not aware of the incident.

“I am not aware of it as at now. The matter has not got to my table as I’m talking to you,” Joseph said.

In his reaction, Chief Falae said the herdsmen were deliberately attacking his farm for no reason, describing the act as malicious and wicked.

He said this was the third time they would be attacking his farm, saying they also did it in January 2017.

He said, “I don’t know why the herdsmen were attacking my farm; they did it last year, they did the same year before the last.

“That is how they burn it every year so that fresh grass can come out for their cattle to eat.

“They attack my oil palm cultivation; the mature oil palm trees that have been bearing fruits to make palm oil have been burnt down.

“This is a wicked act and malicious damage. This goes beyond what their cattle want to eat.

“Cattle don’t eat oil palm. This is a malicious attack.”