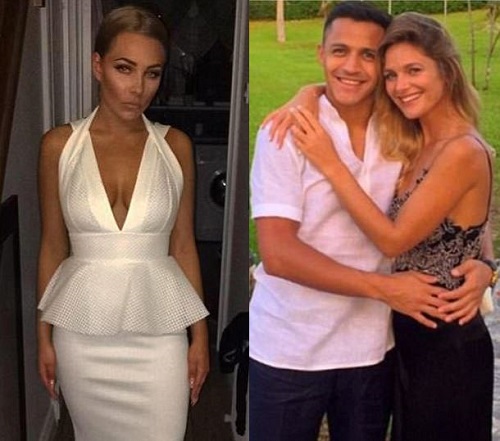 Student Paulina Sobierajska, 20, (left) said Sanchez made no mention of his actress girlfriend Mayte Rodriquez, 28, (right) during their five-month fling

Want-away Arsenal star Alexis Sanchez has hit the headlines lately with his transfer which is expected to materialize any time soon, with Manchester United being the most probable destination. However, there is a new development on the Chilean’s social life and this time it is about a s*x scandal story that has been broken by a British media outlet, the Sun.

The media outlet has alleged that the former Barcelona man had offered to pay for s*x, and surprisingly, her alleged target was a school girl. A student who has so far been identified as Paulina Sobierajska is said to have opened up the lid on how Sanchez fell attracted to her and offered to pay her £1,000 for sexual encounter. Sanchez is said to have invited Sobierajska for a party and a drink at one of the apartments in London.

An excerpt of the article penned down by the Sun reads in part:

“A student claims Alexis Sanchez offered her £1,000 for sex. Before leaving Mayfair’s Novikov Bar Sanchez gave Paulina £1,000 in £20 notes. He also messaged the address of his Kensington flat and said a friend would let her in.  Paulina said yesterday: “He said he really, really liked me and asked me to go to a party and couple of drinks at his flat. It was quite weird but I said sure I will go.”

According to the allegations, the duo met four times with five months, with their last meeting being on the Christmas Eve.

Sanchez is said to be dating a Chilean lady in the name of Mayte Rodriguez and if the claims are true by any means, it could turn out to be a blow to his relationship with the Chilean.

Soccer players are no strangers to sex scandals. Few years ago, French players in Karim Benzema and Franck Ribbery were also drawn in a controversial sex scandal story that forced them out of playing international games. Mario Balotelli, Cristiano Ronaldo among many others have also been victims of similar stories.

Sanchez is expected to complete his transfer from Arsenal to Manchester United before the end of the week after taking a lengthy process on negotiations.