Deolu
A peaceful protest organised by Benue State Students, turned bloody after soldiers reportedly shot dead five people during the protest which was later hijacked by hoodlums as the governor escaped being lynched. 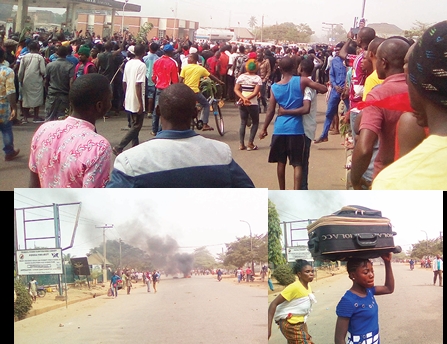 Governor Samuel Ortom of Benue State yesterday, escaped death by a whisker when a protest against killings by Fulani herdsmen turned violence, acording to New Telegraph.
It was gathered that soldiers reportedly shot dead five people during the protest organised by the National Union of Benue State Students (NUBESS).
This came as President Muhammadu Buhari yesterday commiserated with Ortom and the people of Benue State over the killings. The protest, which was later hijacked by hoodlums, started about 7a.m. and lasted for over five hours as irate youths made bonfires and blocked the Wurukum roundabout which links the state with both the North and South of the country.
Travellers were stranded in the scorching sun as some drivers had to take their passengers into the bush for cover until the situation became calm.
It took security men several hours to dislodge the protesters who carried various placards bearing inscriptions such as: “PMB act now or lose our votes in Benue,” “We are tired of burning our loved ones, Fulani must leave,” “PMB must come down himself,” among others while they were shouting “No going back.”
But hours later, the state Commissioner of Police, Mr. Bashir Makama, led his men to dismantle the road blocks and disperse the protesters.
Shortly after, Governor Ortom, in company with top government functionaries and security aides, stormed the area.

Share
Facebook
Twitter
WhatsApp
Previous articleWorld’s Most Expensive Vodka Bottle Stolen, See It’s Worth
Next article“I love him but he is not educated and he speaks terrible English”
- Advertisement -