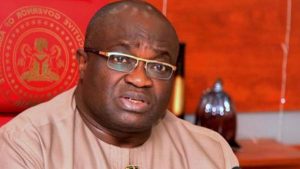 He was sworn in at the Executive Council Chambers of the Governor’s Office on Friday.

He said Mr. Orji, who is next to Mrs. Uzokwe, was sworn in in accordance with the provisions of the 1999 Constitution.

The governor, who expressed worry over the recent developments in the state judiciary, urged Mr. Oji to take immediate steps to restore the confidence of the people in the judiciary.

Responding, Mr. Orji said he appreciated the enormous responsibility of his office and promised not to betray the confidence and trust reposed in him.

He also promised to put the necessary machinery in place to restore the confidence of the people in the state’s judicial system.

The News Agency of Nigeria (NAN) reports that the House of Assembly suspended Mrs. Uzokwe over allegations of acts of tyranny, infamy, gross misconduct and incompetence.

Abia judiciary had been rocked by crisis following the dissolution and reconstitution of the State Judicial Service Commission by the governor in November 2017.

It was, however, alleged that Mrs. Uzokwe did not recognise the new body.

She was also alleged to have refused to recognise and work with the new Chief Registrar, Benson Anya, who was appointed by the new commission to replace, Elizabeth Akwiwu-Chukwu, who was sacked following the dissolution of the commission.

The crisis in the judiciary reached a climax on Thursday when Mrs. Uzokwe allegedly closed all the courts in the state and invited all the judiciary workers to a meeting in Umuahia.