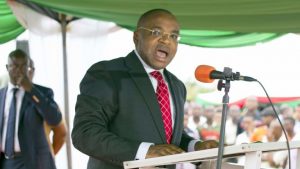 Governor of Akwa Ibom State, Mr. Udom Emmanuel, on Monday sacked Mr. Umoren, who was nominated into the cabinet by Mr. Akpabio, the Senate Minority Leader.

The first official to be sacked from the cabinet was the then commissioner for local government and chieftaincy affairs, Udo Ekpenyong, about two weeks ago.

However, the state Commissioner for Information, Charles Udoh, who announced the sacking of the SSG, said the move was to “rejig the governance structure” in the state.

The sacked officials, Mr. Ekpenyong and Mr. Umoren, are from the Ikot Ekpene Senatorial District where Mr. Akpabio comes from.

Political analysts in the state believe Governor Emmanuel is likely to remove more people from the government in order to weaken Mr. Akpabio’s structure and influence as the governor seeks re-election in 2019.

The Akpabio-Udom feud became public in December when the senator said in a public gathering that the governor has neglected Ikot Ekpene Senatorial District.

Apart from his former allies turning against the senator, Mr. Emmanuel has personally warned that he was going to deal decisively with any politician who instigates trouble in the state, irrespective of his status.

Mr. Akpabio, when he was still the governor, single-handedly brought Mr. Emmanuel from Lagos where he was serving as a director in Zenith Bank. The ex-governor made Mr. Emmanuel his successor despite the opposition from his party, the Peoples Democratic Party, PDP, and others.