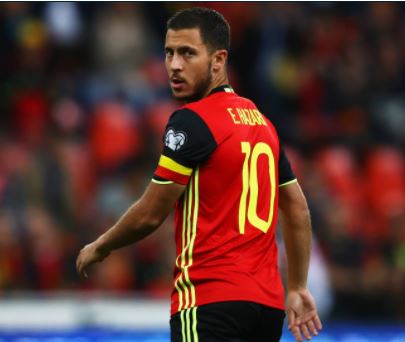 Hazard and Courtois are in the last 18 months of their current deals and are yet to commit their long-term futures to the west London club.

Hazard has reportedly rejected Chelsea’s latest offer earlier this month. Real Madrid are to be monitoring the Belgium internationals ahead of a major summer rebuild.

Lampard told Evening Standard, “Great players such as Hazard and Courtois will always be looked at by Real Madrid, so to protect yourself you need to get them on long contracts.

“With the kind of money being spent elsewhere, Chelsea have to keep moving forward and recruiting new talent to play around them.

“The club can’t lose what they’ve got. Hazard is the main person there.

“He is 27 and a player of his ability has his prime years ahead of him. He will want to challenge for the Champions League but the club have to match that ambition as well.

“Chelsea have been linked with the likes of Peter Crouch, Andy Carroll and Ashley Barnes in the current window, a far cry from the type of A-List signings the club regularly pulled off during the early days of Roman Abramovic’s ownership.

“When Chelsea signed Ballack, it pushed me on.

“It was great we were bringing in a top player but I also knew I had to fight for my place. ‘As a player you must concentrate on yourself first and foremost. But you want to see the club improving.”