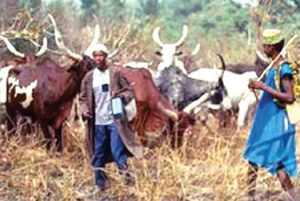 One person was confirmed dead in a fresh attack by gunmen suspected to be Fulani herdsmen at Onicha-Olona community, Delta State.

A middle-aged woman was allegedly raped in a different attack in Ovwor-Olomu in the Aniocha North and Ughelli South areas of the state.

It was gathered that the incident at Onicha-Olona occurred on Friday when the herdsmen shot the farmer dead after he refused to allow their cattle graze on his farm, which they later set ablaze.

The victim, whose identity could not be ascertained as of the time of filing this report, reportedly hailed from Anambra State but had been living with members of his family in the community because of his farming business.

A community source said, “He challenged the herdsmen and refused to allow them to graze on his farm. They brought out a gun and shot him at close range. He fell and died on the spot.

“As I speak to you, there is tension in our community. Nobody knows what will happen next. The man’s corpse has just been taken to the Olona Police Station.”

In a similar attack in Ovwor-Olomu, where the suspected herdsmen also struck on Sunday, at least three persons were injured, while a woman was allegedly raped.

The victims, who were rushed to the Ughelli Central Hospital for treatment, were said to have sustained varying degrees of injury after they were attacked on their way to work in the early hours of Sunday.

The rape victim was said to be the only female among the victims attacked by the assailants.

A relative of one of the victims said, “My husband was on his way to work at about 4am when the Fulani men attacked him with a machete. He sustained injuries on his head and ear, but was able to escape.”

The state Police Public Relations Officer, Andrew Aniamaka, confirmed the killing at Onicha-Olona, adding that the police had launched a manhunt for the suspects.

Aniamaka could not, however, confirm the attack at Ovwor-Olomu in Ughelli South, saying he had not been briefed of the incident.