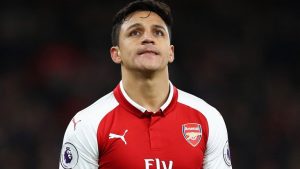 Sanchez is set to move to United in a blockbuster deal that will reportedly make him the Premier League’s highest paid player.

United midfielder Henrikh Mkhitaryan is said to have agreed to join Arsenal as part of the deal.

Mourinho, speaking after United’s 1-0 win at Burnley, said he expected the 29-year-old two-time Copa America winner to complete the move.

“If you ask me if I think he is coming, I think so, but I have no confirmation,” the Portuguese told the BBC.

Wenger left Sanchez out of his squad because the player has travelled to Manchester ahead of his move.

“I didn’t pick him because of the question of him moving to Manchester United. You cannot drive north and as well play football,” Wenger said.

“I expect it to happen. In the next 48 hours it will be decided.”

Wenger also admitted Mkhitaryan must agree to join Arsenal before he will sanction Sanchez’s exit.

“It happens only one way if the other way happens as well,” Wenger said.

“As long as it is not over the line you cannot say it will happen. The negotiations become longer and more edgy as well.

“But if you want to have a bet, it could happen.”

He will also receive £7.5 million a year for four years as a signing-on fee.