Nigerian singer, Kcee is speaking out against the incessant killings of people by Fulani herdsmen in Nigeria.

In a series of tweets, the Five Star Music act says the fulani herdsmen killings is worse than terrorism and it can happen anywhere to anyone.

The Singer also stressed the need for Nigerians to speak out and hold government accountable, stating that they must take action to curb the menace of the Herdsmen in the country.

The police have launched 24hour crime prevention and visibility patrols nationwide to prevent a repeat of last week’s killings in Benue and Rivers States.

It is one of the several measures announced by the Police headquarters after the meeting between President Muhammadu Buhari and Police Inspector General Ibrahim Idris.

Here are his tweets: 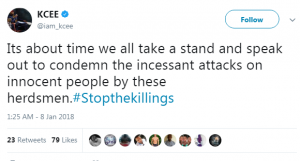 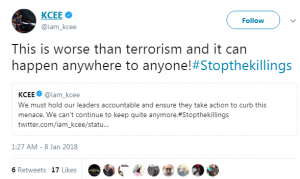 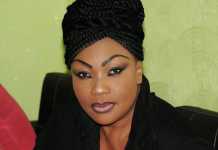