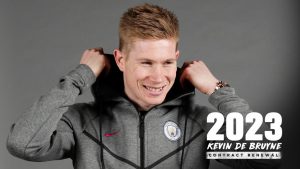 Kevin De Bruyne has signed a contract extension with Manchester City keeping him at the club until 2023, the Premier League leaders said on Monday.

The 26-year-old attacking midfielder has been one of the stars of the season so far with City manager Pep Guardiola even describing him as “one of the best players” he’s ever seen.

“I am really happy to have signed this new deal,” De Bruyne, who joined the Citizens from Wolfsburg in 2015, told mancity.com.

“As I’ve said previously, my intention has always been to stay here at City, where I’ve felt at home from day one.

“Not only are we winning, we are playing great football. It’s a pleasure to be a part of and I’m really excited about what we can achieve in the coming years.”

De Bruyne has already contributed six goals and 10 assists in 24 matches this season with 31 goals from 122 appearances in total for the cityzens.