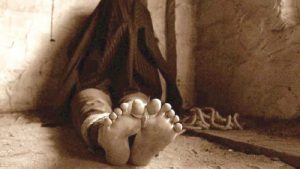 A kidnap victim, identified as Mohammed, says he is worried about the safety of 11 captives at a kidnappers’ den in the Ikorodu area of the state.

The 22-year-old security guard explained that the victims were in danger, urging the Lagos State Police Command to rescue them.

Mohammed, a guard at a hospital in Opebi, Ikeja, had escaped from the den by a stroke of fortune and was admitted to the hospital for treatment.

He told newsmen on Monday that he was heading for Oregun, a neighbouring community, around 6am on Thursday, January 18, when some gunmen in a Jeep waylaid him on the Opebi Link Bridge.

He said one of them swiftly alighted from the vehicle, pointed a gun at him and ordered him into the Jeep.

He said, “I was going to call the truck driver that supplies diesel to the hospital. On getting to the Opebi Link Bridge, a Jeep suddenly parked in my front. I wanted to run. A tall hefty man pointed a gun at me and instructed me stop. He threatened to shoot me if I ran.

“He ordered me into the Jeep. I pleaded with them to collect my phone and the money on me and allow me to go. They said they were not interested in my money or phone. They blindfolded me and zoomed off.

“Next, I found myself inside a hut in a forest. We were 12 young men. They did not tie us. They were four in number and all of them had guns. There was no food or water.”

Mohammed explained that the kidnappers collected his valuables, took his name, photograph and fingerprints, but did not demand a ransom.

He said on a daily basis, they took away two captives from the camp to an unknown place and replaced them with two fresh victims a few hours later.

The guard stated that he had thought it was over for him until last Monday – his fifth day in captivity – when one of the kidnappers led him outside the camp as he wanted to urinate.

He said, “That evening, I told them that I wanted to urinate and one of them led me somewhere. When we got there, something told me to escape. But I was afraid the man could shoot me. When I noticed that he had looked away from me, I managed to escape. I cannot explain why the man did not see me. It was divine intervention.

“I struggled to walk in the forest for over two hours. I was panting. I saw a motorcycle rider and begged him for assistance. He said the place was dangerous. He took me to Odogunyan junction and gave me N100 to call my relatives.

“I called my sister at a business centre. She came to pick me up around 11pm and took me to the hospital. My fear now is what would be the fate of those I left at the camp. The police should rescue them.”

An official at the hospital, who did not want his name in print, said by the time Mohammed was brought in, his pulse was low.

“If you hit him, he would not feel any pain. He was traumatised. If he had stayed a little longer, he would have died. For four days, he was placed on drips; he could not eat,” he added.

The official said he and a colleague reported a case of missing person at the Area F Police Command, Ikeja, on the day Mohammed was kidnapped, adding that the police told them he would be declared missing after 24 hours.

He said the following day, he went back to the command to obtain a police report so that Mohammed’s MTN line could be tracked by the network provider.

He noted that the command delayed till Monday before the report was issued.

“But on Friday, we got someone to track the line. The person told us that Mohammed was around a hotel in Kuramo. The address was sent to a senior police officer and he acknowledged the receipt. I was disturbed that no effort was made to act on the lead.

“The so called report the police gave us was rejected by the network provider. They said it did not comply with the NCCA requirements and that the police were aware of the standard format,” he added.

Another official said a police officer later directed them to the Anti-Kidnapping and Anti-Cultism unit on Morgan Crescent, Surulere.

He said the officer-in-charge of the unit lamented that the case should have been referred on time.

“Around 11pm on Monday, I got a call that Mohammed had been found and that he was in the hospital. For the five days that he was on admission, the police did not come to debrief him and they are aware that he had been found. I believe they can rescue others at the camp if they act promptly,” he added.