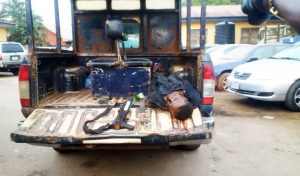 Officials of the Edo State Police Command have shot dead a suspected member of a kidnap syndicate in Ovia South-West Local Government Area of the state.

It was gathered that the hoodlums had on Wednesday emerged from the bush along the Benin-Lagos expressway and blocked a portion of the road, making it impassable.

A team of policemen from the Okada division were said to have stormed the area, after a distress call, and engaged the kidnappers in a shootout.

The suspected criminals were said to have fled to the Benin-Auchi road and also engaged another set of policemen in a gun battle, which left one of the hoodlums dead.

The Commissioner of Police, Mr. Johnson Kokumo, told our correspondent on Thursday evening that, an AK 47 rifle, a machete and some charms were recovered from the dead suspect.

Kokumo also said that the victims of the hoodlums were rescued.

The commissioner said, “You can even see an underwear affixed with charms. Their (kidnappers) own area of specialisation is that they are resident in the bush, come out to the road to kidnap people and move them into the bush.

“It is from the bush camps that they negotiate for ransom. Nemesis caught up with him (deceased) and the victims are here.”

One of the victims, who gave his name as Ahmed Muhammed, said that the suspected kidnappers had accosted him and forced him and others into the bush, where their phones were forcefully taken.

“I was coming from Warri at about 10:30pm when I saw about 10 men blocking the road. They ordered us to wait and threatened to shoot us. We ran into the bush before the police came,” Muhammed, a truck driver stated.

Another victim, Chigbum Edeh, from Enugu State, explained that he was travelling to Lagos when he encountered the kidnappers.

Edeh, who claimed to be an escort of goods, said.”As we were on our way on the Auchi road, they (hoodlums) blocked the road. The driver of the vehicle and I ran into the bush.

“While in the bush, we heard gunshots. But the police later came to take us to their station.”