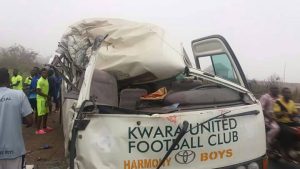 It was a terrible experience for players and officials of Kwara United Football Club, the newly promoted  side, @KwaraUnitedFC  had an accident on Lagos-Ibadan expressway on their way back to Kwara after the #NNLSuper4 in Lagos.

According to reports, some of the players sustained injuries but no death was recorded.

The Nigeria Professional football league is expected to start this weekend, January 14, 2018.