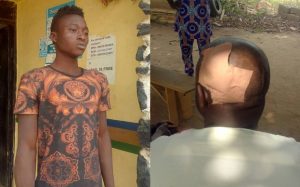 The Ogun State Police Command have arrested a labourer,  identified as Jacob Monday,  for allegedly attacking his supervisor, Monday Dare, in a rice plantation in the State.

He allegedly committed the offence on the 19th December 2017 and fled to Kabba, Kogi State where he was nabbed on 2nd January 2018.

The suspect allegedly attacked the supervisor on the farm situated at Alabata village in Obafemi Owode Local Government Area of the state when he came to pay the salary of the workers.

The case was said to have been reported at Owode Egba Divisional headquarters of the command by one of the workers, Kamoru Akanbi.

Akanbi was reported to have said that after Dare had inspected the stretch of work done on the farm by the suspect and paid him, the suspect suddenly hit him with a club on the head.

He added that the supervisor thereafter lost his consciousness, and the suspect not satisfied with that, further macheted his body with cutlass until he passed out momentarily.

Akanbi said that was when the suspect dispossessed him of the money meant for the salary of other workers and bolted away.

The state Police Public Relations Officer, Abimbola Oyeyemi, said on the strength of the report, the Divisional Police Officer, Owode Egba Division, Sheu Alao, detailed detectives to the scene where the victim was quickly rushed to a hospital for medical attention.

He said the suspect was later trailed and arrested at Kabba in Kogi State and brought down to Ogun State.

Meanwhile, the state Commissioner of Police, Ahmed Iliyasu, has ordered the immediate transfer of the suspect to Federal Special Anti-Robbery Squad, Magbon, Abeokuta for further investigation and prosecution.