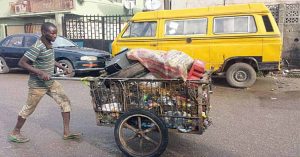 The Lagos State Government on Saturday announced the ban on the operations of cart pushers and wheelbarrow operators, saying their activities are inimical to the environmental cleanliness of the state.

The Secretary to the State Government, Mr Tunji Bello, made this known in a statement in Lagos.

Bello said that with the flag off of the Cleaner Lagos Initiative, the continuous activities of cart pushers would pose a threat to its success.

He said investigations had revealed that the cart pushers were responsible for most of the illegal dumping of waste in canals and road medians at night which causes flooding.

Bello said that aside from constituting environmental nuisance, they also constitute security threat.

“What the state government has discovered is that these people use the night to perpetrate all sorts of dastardly acts.

“They dump refuse indiscriminately on the median of major roads and highways.

“They also pose serious security threats because they use those carts to hide arms and ammunition under the guise of carrying refuse to rob unsuspecting residents,” he said.

Bello said the state government had finalised plans to ensure that the CLI covers every area of the state and that refuses were well packed and collected.

He urged residents to desist from patronising the banned cart pusher operators or risk prosecution.

“Security agencies in the state have been directed to ensure that those found still operating are arrested and prosecuted according to the State Environmental Laws.

“The law also applies to residents who patronise cart pushers.

“It is an offence and the state government will not hesitate to enforce the law to put a stop to such practice,” Bello said.