40-year-old Nigerian returnee from Libya, Omo Harry, has narrated the bizzare and unfortunate things himself and other Nigerians faced while they were trapped in Libya on their way to Europe. 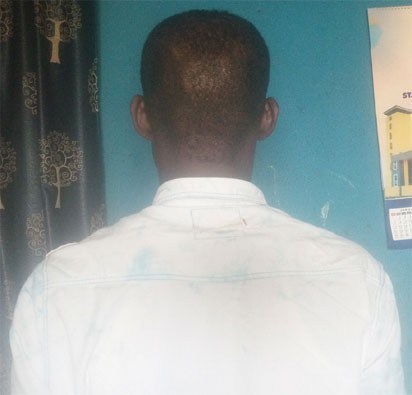 In an interview with Vanguard, Omo who recently returned to Nigeria, narrated how his friend, Denis’s girlfriend, Rita, whom they all embarked on the journey to Europe in April 2016, was raped to death because she could not afford the money needed for her to continue her journey from Libya to Euope.

Omo said Rita was handcuffed and boys took turns to rape her. She died when one of the boys tried to penertate her. Her corpse was abandoned for two days before it was removed. Her boyfriend watched the men take their turns to have sex with her.

My friend, Denis, said I could travel to Europe if I could raise at least N500,000. He told me that he was also trying to raise same amount for an agent that would facilitate it. I had to sell all my property , including the parcel of land I acquired at Ogudu Bale area of Ogun state. But I could only raise N350,000 at the end. Denis was able to raise N300,000 while his girlfriend, Rita, had N250,000. The agent said he would complete the money but that we would pay him the balance when we got to Libya. When asked how, he said he would introduce us to someone , who would get us a job and that after paying his balance, we would proceed to Europe.

We bought gala, garri and bread and also bought two bags of sachet water as advised by the agent and left Lagos for Kano. On arriving the border between Kano and Niger, the agent told us to bring N7000 out of the money with us. As we approached the border, a Customs officer came, collected the money from us and asked us to wait until he gave the directive for us to cross thorough a bush path.

Finally, we arrived Qatrun, the first state in Libya . We were taken to a connection house . In that connection house were tranke which are camps where migrants who do not have the needed amount to continue the journey are kept. On the first day at the tranke, we were welcomed with good food. But at night, they began a roll call and separated those who had completed payment from those who hadn’t . Of course, myself, Denis and Rita were in the disadvantaged group. At this point, the agent was nowhere to be found. In fact we were all confused as to what to do next . At this connection house, the head is called Capon. We also had OC Torture . The Capo collects relatives number and demand money for captives to continue their journey. It was at that point that I got to know that Rita did not tell her parents she was traveling. When she was given the phone to speak with her mother, we overheard her crying. Rita’s parents sent N150,000, which covered three of us. We thought we were free, not knowing that the horror had only just begun.” Sabha connection house.

From Qatrun, we were moved to Sahba , in Western Libya, where the main tranke called Ali ghetto is located. It is close to the University of Sahba . It was a place of no return . From there , you are expected to pay another sum to cross to another connection house in Inias, from where you will embark on the sea trip to Europe. When they demanded for more money, Rita said she would like to go back home. But they insisted that she must pay before going back. Immediately we got there, they collected our international passports and tore them. They said they don’t allow people to embark on the sea trip with anything except the clothes on them. In my excitement, I called my people in Lagos and they sent N150,000. Unfortunately, it could only take me , as Denis and Rita did not have money to cross the second huddle. Instead of leaving them behind, I kept my money and decided to wait until their relations could send money to them.”

Rita’s parents called to say that they had no money. Immediately the call was received, Rita was chained to an iron rod where White Libyans came and took turn to rape her. This continued for two weeks without food . In one of the instances, Denis stood up to challenge one of the men but he had his ear chopped off with a hot iron rod that was plugged to a socket.. On the day she died, five boys first came , had their turns with her and left. At that point, she could only stare into space. Ten minutes later, another set of young men came to have their turn. It was when the third person was on her that she was discovered to be motionless. Her body was there for two days before it was removed”

Omo also narrated how Libyan men would come to where the illegal migrants are kept, pay some money to take any strong black man they see who would have sex with them. The black men would after sexually satisfying them, will then be brought back in the morning. Omo said he always feigned he was sick whenever the Libyan men came to pick any of the illegal male immigrants for gay sex.