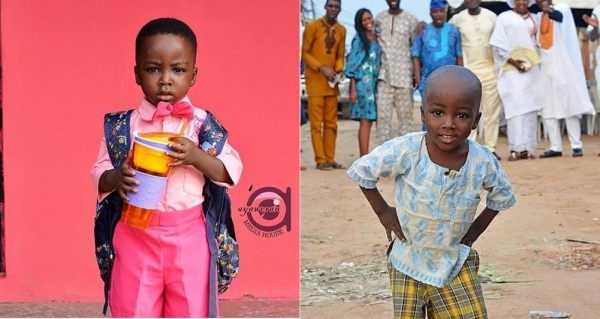 Weeks ago, a picture showing a cute little boy photobombing a wedding picture went viral online, with many commending the photographer and the boy.

The viral picture made many online users calling for the boy to be found, so little donations can be made towards his welfare.

The little boy named Tobi has just started school all thanks to some well meaning Nigerians.

He is three years old and a product of failed marriage. According to his father, the boy was abandoned by his mother when he was barely a month old. His father, unable to cater for the boy, sought for a nanny who works in a daycare center, to take custody of the boy.

The nanny has been taken care of the boy since then. Though the father is a graduate of Electrical Engineering, he is jobless.

Though Oluwatobiloba has never seen the four walls of a school, he has a good command of English language considering his age. He speaks and understand English Language.

The father is appealing to well-meaning Nigerians to assists in educating the boy who is passionate, bold and intelligent.