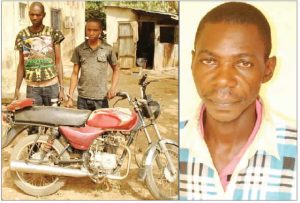 A mechanic, identified as Joshua Simeon, has confessed to stealing a Toyota Carina 2, with registration number AP 270 ZAR belonging to a police officer, to enable him to pay his children’s school fees.

The suspect, who was arrested by a police team from Maitumbi Division in Minna, explained that he wanted to sell the car at a give-away price to enable him to settle the school fees of his four children in primary and secondary schools.

It was learnt that the owner of the car, Surajo Garba, was asleep when the suspect made away with his car.

Northern City News gathered that Simeon had been involved in theft of vehicles for some time until he was apprehended.

Our correspondent also gathered that the suspect, who got married 15 years ago, had a master key with which he opened car doors and stole them.

“I don’t know what I am going to tell my wife and my children, I am ruined, my marriage is in trouble. I hope they will find a place in their hearts to forgive me,” he said.

The command’s Public Relations Officer, Muhammad Abubakar, narrated to our correspondent on Sunday that the suspect was arrested behind Maitumbi Primary School, Minna along Flamingo Bridge.

Abubakar said the suspect would be arraigned in court after investigation.

He described the two suspects as ‘comrades in crime’, saying they would be charged to court after investigation.

Abubakar said the police were working round the clock to ensure that residents’ lives and property were protected “so that the people will go about their normal business without fear.”