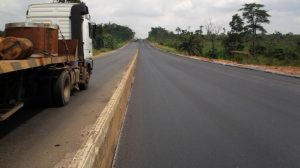 Three persons have died in a multiple accident along the Benin-Ore road, the News Agency of Nigeria (NAN) reports.

The accident which occurred very close to the Ovia river involved four trucks.

According to a witness, one of the trucks with diesel was said to have run into another truck conveying iron rods.

Two other trucks ran into them to cause a traffic gridlock on the road.

An official of the Federal Road Safety Corps (FRSC) who spoke to NAN confirmed the deaths and said that two of the corpses had already been evacuated to a morgue.

He also said that the accident occurred in the early hours of Saturday , adding that the fourth driver was seriously injured and has been taken to the hospital.

NAN further reports that men of the Federal Road Safety Corps were on ground to ensure free flow of traffic.