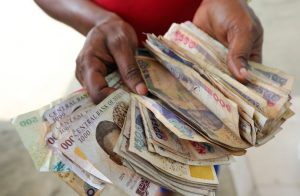 The naira closed at N363 per United States dollar at the parallel market on Tuesday, the same rate it closed before the New Year break on Friday.

The naira has been been moving around 365/dollar for some months, rose to 364/dollar as the Christmas holiday approached.

The naira later rose to 364/dollar last week before closing at 363/dollar on Friday.

Foreign exchange traders and currency analyst had predicted that the naira would be stable during the Christmas and New Year holidays.

They said the Central Bank of Nigeria’s regular interventions through the injection of dollars into the market would deter currency speculators from making a bet on the local currency.

The naira has been hovering at 360/dollar at the Investors and Exporters FX Window, while it has been quoted at 306.05 at the official market, the level at which the central bank has been intervening.

The CBN has been injecting dollars into the forex market on weekly basis in the past few months.