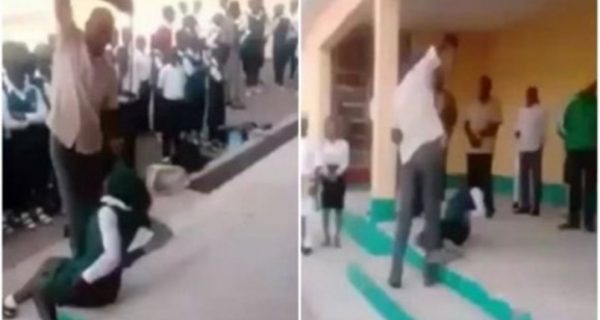 Following the viral video which sparked outrage, as it showed students of Government Science Secondary School, Nassarawa-Eggon being flogged mercilessly, the principal and three other teachers have been suspended.

The state Commissioner of Education, Mr. Tijjani Ahmed, who confirmed this to Northern City News on Thursday in Lafia, said the state government had banned corporal punishments in public schools across the 13 local government areas and 18 development areas of the state.

“We have constituted a committee to investigate the matter and report to the ministry in the next one week to enable the ministry to take appropriate action. Already, three staff members of the school including the Principal have been given a one-month suspension over their involvement in the corporal punishment pending the report of the committee set up by the ministry.”

He further warned teachers meting out corporal punishment to students to desist “as anyone caught would face disciplinary action.”

The education commissioner stated that “even if teachers would want to punish students for any offence, it should be minor punishment.”

He added that the government would continue to respond to the challenges facing the education sector in the state.

When our correspondent visited the school, the suspended school officials were not on duty, but it was gathered that the management had decided to stop punishing students who resumed late to avoid sanctions.

See the video below;