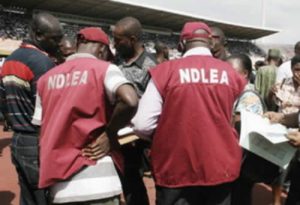 The National Drug Law Enforcement Agency (NDLEA) has confirmed the seizure of 25.6 kilograms of an illicit substance believed to be Cannabis Skunk in Yola, Adamawa.

The State Commander of the Agency, Yakubu Kibo, who confirmed the development to journalists in Yola, said that four suspects were arrested in connection to the alleged offence.

He explained the “big seizure and arrest was successfully carried out on the January 19.”

Mr. Kibo said the illicit substance was compressed in 24 pallets and was seized by the agency’s Special Operative Officers along Yola-Numan Highway, in a luxury bus coming from Lagos to Yola.

“On Friday, Jan. 19, the Command arrested four suspects and made seizure of 708.2 kilograms of assorted illicit substances which included 25.6 kg of Cannabis Skunk compressed in 24 pallets.

“The Cannabis Skunk is the most dangerous species of Indian hemp plant, mostly found in some foreign countries.

“The specie ‘is much potent’ than the popular and conventional Indian hemp found in Nigeria. It is four times stronger with devastating mental consequences for users,’’ Mr. Kibo said.

“Another disturbing trend is the increasing number of women in drug trafficking into the state as presently two women are in our custody in connection with drug trafficking,” he explained.

He called on the parents to closely monitor their children and guide them against the ugly trade.

He urged owners of private and commercial vehicles not to entrust their vehicles to people of questionable characters.

Mr. Kibo said that any vehicle found in conveying or concealing illicit substances stands the risk of being forfeited to the federal government and owners risk jail term.