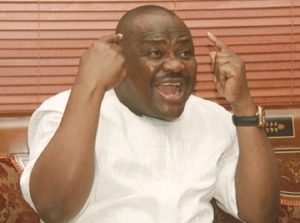 Rivers State Governor , Nyesom Wike has described Nigeria as a country in coma, he said only his party, the Peoples Democratic Party, ( PDP) can salvage the country.

He said this at the Government House Port Harcourt on Wednesday when the Mr Lamido visited to inform Governor Wike of his intention to vie for the position of the President.

Governor Wike said that the APC is a party of strangers with no knowledge of the intricacies of development.

He said that the APC thrives in politics of mischief wherein it engages in high level intimidation, corruption and dirty political schemes to compel defection of PDP members to her fold.

“If you decamp to the APC, you are no longer corrupt. APC is a party of daylight deceit.

“I am happy that one of those who left to bring a messiah, have realised that the so-called messiah they brought is no longer the messiah Nigerians expect. PDP is the only hope for Nigeria”, Governor Wike said.

The governor noted that though the PDP made mistakes in the past, the Party is the only platform with the commitment and patriotism to take the country out of the current situation.