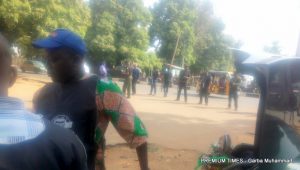 The Kaduna State police command have deployed 8, 000 personnel across Kaduna metropolis ahead of the protest by the Nigerian Labour Congress (NLC) over the sack of 36,000 civil servants by Gov Nasir El-Rufa’i.

The News Agency of Nigeria (NAN) reports that heavily armed security personnel were stationed at the NLC headquarters along Independence Way and strategic areas of the metropolis while others were patrolling the town.

The police and other security personnel were also stationed along major streets in the city including Kaduna-Kachia road, Kaduna-Zaria highway and Kaduna-Abuja expressway.

Most streets were empty with minimal vehicular movement due to the high presence of security personnel within the town, with few commercial vehicles plying the roads.

The NLC president, Ayuba Wabba, is expected to lead other union members from across the country to protest the mass sack of workers by the state government.

However, the police and state government on Wednesday announced total ban on all forms of protests in the state.

Muktar Aliyu, spokesman of Kaduna State Police Command, told NAN that about 8,000 policemen were deployed in the city to stop the planned protest and ensure law and order.

“The police will not fold its arms to whatever will disrupt peace and order in the state.

“We are on top of the situation to ensure maximum protection of lives and property,’’ Mr. Aliyu said.