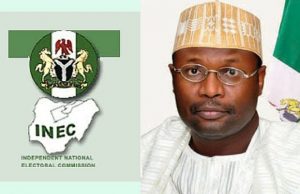 Nigerians have been assured by the Chairman of the Independent National Electoral Commission,(  INEC) , Mahmood Yakubu, that their votes will determine the outcome of the 2019 general elections and future polls in the country.

According to a report on the commission’s website, the chairman gave the assurance at the 15th edition of the Daily Trust Dialogue on Thursday in Abuja, with the theme: “Nigeria and the challenges of 2019.”

He said there had been a lot of improvement in the electoral process since the current commission came on board even though the commission is not ignorant of the enormous responsibility of conducting elections in Nigeria.

He said the commission is not “unmindful of the enormous responsibility of conducting elections in the largest presidential democracy in Africa, and second only to that of the United States in terms of registered voters.”

The INEC chairman disclosed that as at last week, the commission had 74 million registered voter. He said that by projection, the figure could hit between 80 and 85 million by 2019 due to the ongoing nationwide Continuous Voter Registration, CVR exercise.

He expressed the commission’s resolve to adhere strictly to the recently released timetable and schedule of activities for the 2019 general elections.

Mr. Yakubu implored the media to verify facts first and help reduce the false reports being circulated on social media.

Kate Henshaw, a Nollywood actress and politician, in her presentation spoke on youth participation in the electoral process.