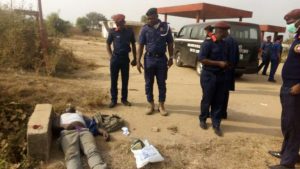 Operatives of the Nigeria Security and Civil Defence Corps ( NSCDC) have discovered another lifeless body on Wednesday morning, just days after the body of a teenager was found in River Osun in Osogbo.

According to the Corps Public Relations Officer, Babawale Afolabi, the lifeless body was discovered was discovered around a sawmill in Onibueja area of the state capital with no sign of mutilation.

Unlike the teenager who drowned in Osun river without identification, the dead man was discovered to be one Adejumo Sunday.

The dead man’s phone, and an ATM was found on him alongside his wristwatch.

While dismissing any connection between the drowned teenager and the recently found lifeless body the Corps spokesperson said “It is hoped that the various clues provided will ease investigation into his death and possibly communication with his family.”