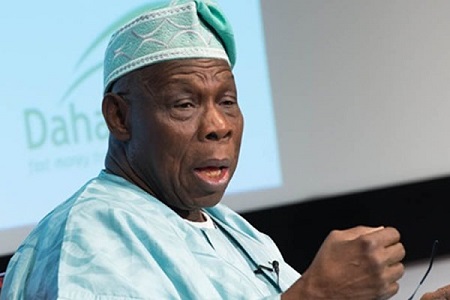 It has been revealed that the Coalition for Nigeria, a third-force political group being championed by former President Olusegun Obasanjo, appears to be a major platform that has continued to attract prominent and other members of the National Assembly.

According to Sunday Punch, aggrieved members of the ruling All Progressives Congress and the opposition Peoples Democratic Party in both the Senate and House of Representatives are said to be considering Obasanjo’s platform to achieve their political goals in the 2019 general elections.

One of the aggrieved lawmakers, who spoke to one of Sunday Punch on condition of anonymity for fear of persecution, said it was becoming clear that many of them would be denied electoral tickets by their parties and the option was to consider Obasanjo’s offer.

The APC members, according to the source, include serving and former governors and members of the National Assembly.

The APC senator from the North confirmed that the ex-President had reached out to some of the lawmakers, who are now lobbying their colleagues to embrace the CN.

“It is true that he has reached out to us and I can tell you that 80 per cent of National Assembly members are with him. It is very huge,” the legislator added.

When asked if the lawmakers, who are interested in the CN, would remain in their parties but shift their loyalty to the new pro-political group, or they dump their parties outright, the source said a new party was under consideration.

“Registration of a political party cannot take more than two weeks. I can tell you that out of the parties that were registered, there is one at hand – somewhere – which will likely be the focus,” the lawmaker said.

While refusing to name the party, the source confirmed that the unnamed party would the used to execute the agenda of the coalition.

The senator said mass defection from the APC and the PDP loomed, especially at the National Assembly.

He added, “I can confirm to you that there is most likely to be defections from the APC in the next one month.

Obasanjo had, in his controversial ‘special press statement’ on Tuesday titled, ‘The Way Out: A clarion call for coalition for Nigeria Movement’, dismissed the chances of the two main political parties in the country from salvaging Nigeria.

He also called and pledge his support for the formation of a ‘third force’ to be known as Coalition for Nigeria.

Obasanjo had said, “We need a Coalition for Nigeria. Such a movement at this juncture needs not be a political party but one to which all well-meaning Nigerians can belong.

“That movement must be a coalition for democracy, good governance, social and economic well-being and progress.

“A coalition to salvage and redeem our country; you can count me with such a movement.”

The Senator also disclosed that the forthcoming national convention of the APC would determine the survival of the ruling party.

He alleged that many members of the APC caucus, especially those who crossed from the PDP ahead of the 2015 elections, had been marginalised after the party gained power.

“There is a possibility that the APC would become a minority party at the National Assembly before the elections. And that will put the President in a very difficult situation.

“This will happen because many APC members would not be given ticket to contest and they would likely join the third force or the PDP. The PDP is now wooing those in the APC,” the federal lawmaker added.

Efforts to get a former Governor of Osun State, Prince Olagunsooye Oyinlola, who is reported to be one of the arrowheads and the spokesman for the coalition, did not succeed.

Oyinlola, a close ally of Obasanjo, did not return repeated calls to his telephone by one of our correspondents. He had yet to reply a text message sent to his mobile to confirm his involvement in the coalition as of the time of filing this report on Saturday night.

But Senator Adesoji Akanbi (APC, Oyo South) said he would remain in the ruling party until it was clear that the CN was a better alternative.

According to him, the coalition has yet to produce a well-defined agenda.

He stated, “The coalition is immature. Baba has raised it, thinking that both the APC and the PDP have no ideological base again. But I am a party person and APC runs in my blood.

“We know that there are problems here and there but we really want to see the picture of the alternative that will provide better governance for Nigeria. If we have a better option, why not? A lot of Nigerians will embrace it; we will embrace it; I will embrace it.”

Another member of the APC caucus, who also spoke on condition of anonymity, however, said he agreed that Buhari’s performance had failed to meet Nigerians’ expectation but argued that no party or group had so far offered a better alternative.

The lawmaker added, “Sincerely, Nigeria is a difficult country to govern and my fear, as of today, is that apart from the personality of Buhari and what he stands for, does Buhari have the strength to govern Nigeria for five years more?

“I believe in Buhari because I know that the man is honest but he is old. And Nigeria is a country that has very weak institutions.”

“Former President Goodluck Jonathan, if he had done well, people like Buhari would have retired for long. It is the failure of Jonathan’s generation, to which I also belong. Do we have a better alternative now? If there is one, they should let us know.”

It was also gathered that politicians across political divides in the country had launched an intensive search for a capable replacement for Buhari, findings indicated on Saturday.

Sunday Punch reports that politicians were now ‘targeting’ persons they believed were “neutral” and free from any affinity to the ruling APC and the PDP to assume the leadership of the country.

“Neutrality is important because both the APC and the PDP have been tried, but the much anticipated change has also failed to come,” a ranking parliamentary official told Sunday PUNCH in Abuja.

“The APC and Buhari, from all indications, have failed to offer anything better than the PDP.

“As a matter of fact, the wave of defections from the PDP to the APC only suggests that the ruling party is simply PDP by a different name.”

The source said to achieve the plan, Nigerians, with enough financial clout, were being contacted to raise funds to prop up an eventual candidate for the 2019 presidential race.