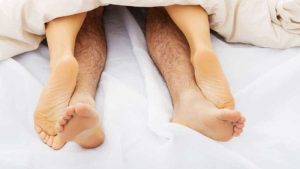 A 53-year-old man narrowly survived mob lynching after he was caught pants down having an illicit affair with his son’s wife.

It was gathered that Hassan Chelimo from Kapkwata village in Uganda was roughed up and clobbered by enraged locals who accused him of having an affair with his daughter-in-law.

Confirming the incident, Sipi region police spokesperson, Rogers Taitika, said they came to the rescue of the suspect following a tip-off that he was about to be lynched by the mob over his abominable act.

According to the villagers, Chelimo had the forbidden secret affair with his daughter-in-law, identified as Asula Chellangati, when his son, Martin Mutai, was away from home.

Mutai, who is said to be Chemilo’s eldest son, had reportedly traveled to South Sudan to look for a job. He rarely came back home.

Mutai’s long stay in the foreign country left his wife feeling lonely and under the watchful eyes of his father.

Chelimo and Chellangati found themselves entangled in an affair during this time.

The locals, who are still baying for Chelimo’s blood, told police that the lustful old man had been doing the despicable act with his daughter-in-law since his son left home.

In his defense, Chelimo told the police that Chellangati lured him into the relationship by sending him romantic bedtime messages such as “good night sweetheart”.

He could not help himself. The father-in-law has been arrested. An investigation into the disturbing affair has commenced.