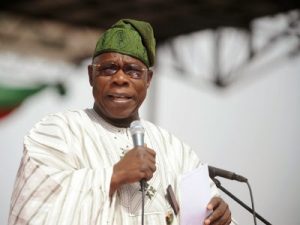 A former governor of Abia State, Uzor Orji Kalu, on Thursday blasted, a former President of Nigeria, Olusegun Obasanjo’s letter to President Muhammadu Buhari criticising his poor handling of the economy and advising him not to contest the 2019 presidential election.

Mr. Kalu told newsmen at the Murtala Muhammed Airport 2, Lagos, that Mr. Obasanjo lacked the moral right to comment on such national issues.

He noted that Mr. Buhari’s government may be slow in taking critical decisions, but had done well in tackling corruption, recalling high level of graft in the 16 years that the Peoples Democratic Party (PDP) ruled Nigeria.

Mr. Kalu said Mr. Buhari had recorded modest achievements in his two and half years tenure, which necessitates his re-election.

The former governor listed the commencement of work on the Second Niger Bridge and other interventions in the economy as some of Mr. Buhari’s feats.

“I am not going to talk about former President Obasanjo’s letter because I am going to make some consultations with the United States, Germany, China and the United Kingdom, then I will come back and speak on that letter.

“I think Obasanjo’s letter is not in the best interest of Nigeria. I don’t want to reply him because I have given you example times without number.

“There are three express roads Obasanjo refused to build when he was the president of Nigeria; Port Harcourt-Okigwe-Umuahia-Enugu expressway. It is being built now by the Buhari administration.

“Another one is the Enugu-Awka-Onitsha Expressway. It is being built now by the Buhari administration. Obasanjo did not build it.

“Then there is the Onitsha-Owerri-Aba Expressway. The Buhari administration is building it now.

“Between Obasanjo and Buhari who should I call my friend in real terms? So Buhari is my friend; so he is a better President.

“I don’t wish to reply that letter because the former president has no morals that should qualify him to write that letter,” he said.

According to Kalu, Nigerians have also not forgotten the $16 billion wasted on building power plants by the Obasanjo administration which yielded no result.

He said it would therefore be unfair to the South East, South South and South Western parts of Nigeria not to support the second term bid of Mr. Buhari.

He however advised Buhari to speak on security issues in Nigeria because it was threatening the fabric of socio-economic cohesion of the country.

Mr. Kalu said the challenge of herdsmen/farmers clash was lingering in some states because their governors lacked the capacity to handle the situation.