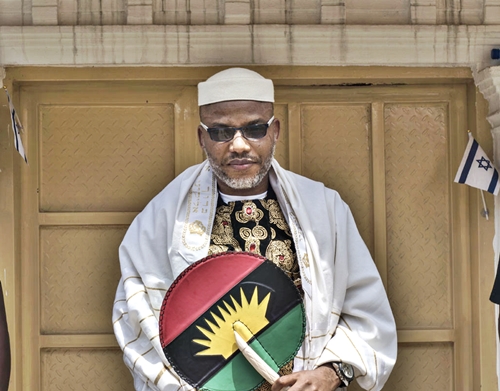 While speaking in an exclusive interview with TheCable, spokesman of the Indigenous People of Biafra (IPOB), Emma Powerful, spoke out on a variety of issues including if the group would accept an option to dialogue with the federal government, the upcoming 2019 general election, and more.

In its bid to stop last year’s governorship election in Anambra, IPOB failed and when asked of its plans for the 2019 general election, Emma said;

“Who told you IPOB failed in our bid to stop the elections in Anambra state? We successfully boycotted the elections as a prelude to what the world will witness come 2019. Less than 1% of eligible voters bothered to turn up to vote. That was the reason INEC spent days doing their best to bump up the figures to a respectable level.

“This, they succeeded in doing because the Abuja anointed politicians don’t want the world to know that power has slipped from them back into the hands of the masses. They don’t want the world to know how potent IPOB is but we know that they know. We have variously challenged INEC to publish the original result sheets collated from polling stations around the state to prove that less than 1% voted but to no avail.

“Go around Anambra state today and hear people testify that elections were totally boycotted. Where INEC got the figures they announced, only them can say. Election rigging, manipulation of results and inflation of voter figures is nothing new in Nigeria. They are panicking already because we have demonstrated that our people listen to IPOB and no other. 2019 will be a year to remember because, in so far as Biafraland is concerned, there will be no voting.”

When asked if IPOB is willing to come to the negotiation table if the federal government invites it for dialogue, Emma said;

“The answer is no, because Nigeria is not yet civilised enough to understand what dialogue means, neither are they known for keeping to the terms of any agreement reached. Name one agreement Nigeria entered into that ran its course. They think we are for settlement, how mistaken they are.

“We would only consider meeting them through a third party or mediator. History tells us that all conflicts end up on the conference table. Bearing this in mind, we would be willing to discuss with civilised sensible parties on how best to speedily facilitate the peaceful dissolution of Nigeria. Nigeria’s condition is a condition that is clearly unsustainable. The best way to go is referendum.”

When asked if an Igbo presidency in 2019 will make IPOB back down on its quest for a sovereign state of Biafra, Emma said;

“Nothing can make IPOB back down from this divine quest to restore the lost sovereignty of Biafra. Only the will of the people, clearly expressed during a referendum. We hear Nnia Nwodo, Ohaneze Ndigbo, Igbo governors and Abuja based errand boys, we ignorantly refer to as politicians or elite, tell us south-east and south-south do not want Biafra, which is a lie.

“There is only one way to establish the truth and settle this matter once and for all time. That is referendum. If we lose in a referendum, we stop the agitation for Biafra same day. The will of the people is what must prevail under this and every circumstance.”