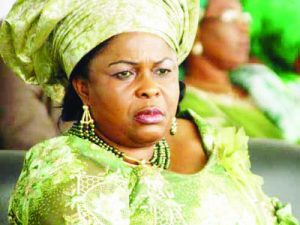 The property of former first Lady of Nigeria, Patience Jonathan was demolished by the  Development Control Department of the Federal Capital Territory Administration, on Tuesday.

The FCT stated that the building, which was located along the Mabushi-Life Camp Expressway, was pulled down because it had no official approval.

The Chief Press Secretary to the FCT Minister, Cosmas Uzodinmma, informed The PUNCH that the Development Control Department only demolished buildings that distorted the Abuja master plan.

He noted that the necessary laid down guidelines must have been breached by the developers hence the demolition of the structure by the FCT Administration.

When asked to respond to claims that the building was the subject of a suit, Uzodimma, said he could not comment on the legal issues surrounding the property.

The lawyer to the property owner, Emmanuel Anene, had told the News Agency of Nigeria that the issue of the building was still pending before the Federal High Courts in Lagos and Abuja.

He said, “Sometime ago, people from the Development Control came to the site, alleging that there was no approval for the building. We met them at their office and showed them the approval, which they accepted. We thought that the matter was over.

“They had earlier gone to court with application for forfeiture of the property to the government which they failed to achieve at the Lagos High Court.”

“So, we were surprised that a team came in this afternoon without notifying us to remove the structure.

“Also, we were not served with any notice for demolition, they just came in now and started the demolition of the structure,’’ he added.

But the Director of Development Control, Mr. Muktar Usman, insisted that that the building had no approval, adding that notice was served for the demolition of the property.

He said the building was not the only one affected by the demolition in the area as there were others that were also demolished.

Muktar alleged that the Development Control Department officials were assaulted during the demolition.

When contacted on the telephone, one of Mrs. Jonathan’s lawyers, Ifedayo Adedipe (SAN), said he had heard about the demolition but had not received full detail.

He, however, described the action of the FCTA as evil, adding that it was not different from the self-help tactics of the Fulani herdsmen.

Adedipe said, “This is where we find ourselves in Nigeria today; where government agencies resort to self-help like herdsmen without recourse to the court of law. It is unfortunate.”

When asked if Mrs. Jonathan would be taking legal action, Adedipe said a decision would be reached later.