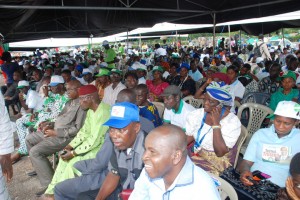 The National Vice Chairman of the Peoples Democratic Party South-East zone, Chief Austin Umahi, has declared that the party would soon commence “Operation Show your Permanent Voters Cards” by members during rallies.

Umahi made the declaration on Saturday during a solidarity rally, held at Government Field Obiozara Ohaozara Local Government Area of the state, in support of Governor David Umahi 2nd Term re-election 2019. The rally was organized by the people of old Ohaozara clan comprising Onicha, Ohaozara and Ivo local Government Councils of Ebonyi State.

He advised members of the party to register in the ongoing Continuous Voter Registration embarked upon by the Independent National Electoral Commission and obtain their Permanent Voter Cards to enable the party to emerge victorious in the forthcoming general election in 2019.

“Very soon we are going to embark on “Operation show your PVC’s during rallies, this will make party faithful know the merits of having their cards,” he emphasized.

The PDP boss disclosed that the party would soon embark on house to house campaigns to sensitize the people on the ideals and achievements of Governors of PDP controlled States, especially in Ebonyi State.

“We are in a hurry to possess what belongs to us, we are using Ebonyi State model to market PDP across the 36 states in the country, Ebonyi is a pace-setter in terms of governance,” he said.

Speaking on behalf of the stakeholders during the adoption of Governor Umahi as the sole candidate of the people, the member representing Onicha, Ohaozara /Ivo Federal Constituency in the National Assemble Chief Linus Okorie, restated that the adoption was a holistic and a consensus agreement.

“We hereby stand here to resolve that Governor David Umahi is hereby adopted as the only person in old Ohaozara division comprising Onicha, Ohazara /Ivo local Governments to contest the Governorship election come 2019”

Earlier in his speech, Governor David Umahi commended stakeholders/opinion leaders of the three Local Councils for adopting him as their sole Governorship candidate come 2019 election.

Umahi emphasized that the State was a PDP State, saying “there is no opposition in Ebonyi State, if you want the vote of the people, you come and talk to them, it is not by staying in Abuja making noise.”