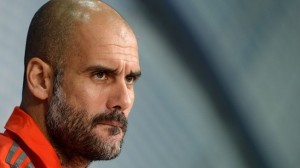 Manchester City manager, Pep Guardiola has called for extra more than 30 senior players on top form level, for a the club to stand any chance of winning an unprecedented quadruple.

The City manager has said repeatedly that he believes there is no chance of his side winning the Champions League, Premier League, FA Cup and League Cup this season.

City are 15 points clear at the top of the Premier League, in the last 16 of the Champions League and the semi-finals of the League Cup, while they host Burnley in the third round of the FA Cup on Saturday.

Yet even though they have been English football’s outstanding side over the first half of the season, their manager believes that maintaining such form will be impossible.

“Maybe that question can be asked in March or April if we are still in all four competitions,” he said. “After that, we are going to talk.

“But tomorrow is the third round of the FA Cup. So thinking about four competitions, it’s an illusion, it’s not realistic, I would say.

“We will need 32 players to play really well for four competitions. That is not going to happen in my squad.”

Premier League and Champions League rules limit clubs to 25 senior players in their squads, although that number can be bulked out with young players aged 21 and under.

Guardiola has suggested he will try to keep City on course for four trophies, despite admitting the difficulty of the task.