Home News Feed Photo: After Praying For A Child, Woman Who Has Been Childless For...
Facebook
Twitter
WhatsApp 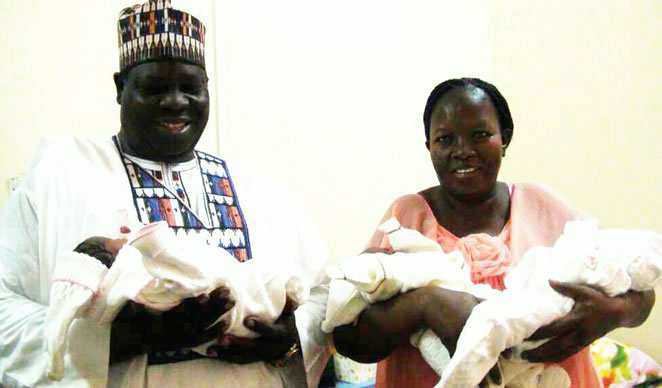 The Dillis with their babies

How long have you been married?

I have been married for 24 years.

How did you cope during the period of waiting to have children?

I suffered abuse and mockery. But with God, all things are possible. In my case, it’s not that God denied me the fruit of the womb. I got married on March 27, 1993. By April of that same year, I took in. In 1994, when it got to the time of delivery, I lost the pregnancy to a miscarriage. I suffered many miscarriages ever since.

How many miscarriages did you experience?

I had three miscarriages after the delivery of the first baby who did not survive at birth. I had two other miscarriages that occurred at five months of pregnancy and another which occurred at three months while I was pregnant.

What have you been doing?

Since the last 10 years, I did not take in. During this period, my husband and I continued in prayers, trusting that God would intervene. Our hope during the trying period has always been God.  At last, nothing is impossible with God.

What were the challenges you faced?

We had issues with my husband’s friends, friends, family and others. I cried at nights, calling on God to help me and wipe away my shame. I believed in His word and understood that delay is not denial. My husband also thought the same way as we both put our confidence in God. I have not wished them death but I have prayed for them to instead be alive to see what God can do.

Did you know you were pregnant with triplets?

No. It’s a great compensation for our long years of delay, for 24 years? I believe God has given us double for all our troubles.

How did you react when you got the result of the scan?

When I did the scan, they called my husband and told him I was pregnant with triplets. This is because my eyes could not believe what I saw. I began to feel somehow. It was with disbelief. For these marital blessings, what do I give God? Thanking God can never quantify the depth of my gratitude.  I don’t know how to appreciate Him for this gift.

What other challenges did you face while pregnant?

It was not easy. The devil wanted to create unhappiness in me by bringing up thoughts of my past failed pregnancies. I kept thinking, during the delivery, that something would go wrong. But I quickly rebuked the evil thoughts. I kept saying, “No, God, this time is my time. God you are going to do something this time round. I must carry my own children.”  I was delivered of the triplets at the Federal Medical Centre, Yola, the Adamawa State capital.

Did you lose hope at any time during the period?

Yes, there were times I was overwhelmed with worries. As a human being, sometimes, you can lose hope. There were many challenges which made me lose hope. The miscarriages and worries compounded my dilemma.

As I grow older, I became forlorn at some point. Like I said, sometimes, I found comfort in the scriptures and at other times, I was traumatised. I often entertained the thoughts that if the children from my previous pregnancies had survived, perhaps I won’t be in this condition. It was a mixture of depression and hope.

When I attended church conferences, and the preacher admonished believers not to lose hope but to have faith in God, I remembered my name which is Hope. I usually prayed, telling God to answer me based on my name though sometimes I thought of giving up.

You said you feared you were getting older. At what age did you give birth?

What memorable incident can you recall while waiting to give birth?

Weeping is the most memorable of them, especially when I heard somebody said, ‘Look at this barren woman’. If I didn’t weep after the mockery, I did so when I got home. I would sit down most times and cry to God that if there’s any sin that I had committed, that is responsible for my condition, He should please forgive me and bless me with children.

I said to him (God), “If it is only one child you can give me, I will appreciate it. I know that if I have just one child, no one would call me a barren woman again. It is far better.”  I knew that my husband heard unprintable statements against me by outsiders. Sometimes, we discussed the issue. I usually asked him to tell me some of the incidents. He asked me not to trouble myself, that God would do it for us. What has sustained my faith throughout this adversity was my husband’s support.

Were there times you contemplated visiting traditionalists?

Of course, that was until recently, because we didn’t know Christ then. We had to move from place to place seeking solutions. We did all that.

Did you get medical help or was it natural?

It is just God and nothing else. It is the doing of the Lord.

Were there times your husband came under any pressure from his family to take another wife to have a child?

No, even though he’s a man. Three months ago, someone called me to inform me that she heard that my husband wanted to take another wife. I told her, “It is well. If that is his wish, I don’t know anything about that one.’’

But I knew within me that her tale was not true. I wasn’t bothered. I told the woman I was not aware of such plans. This is because my husband never expressed such a desire.  In fact, he used to console me, saying, “Either you have a child or not, God is the giver of children. We should not disturb ourselves too much. It is God who is going to give you that gift and not man. So, forget about worrying.”

Couples are usually tempted to blame their partners as responsible for situations such as the one you had.  Did you experience same?

We had that experience. We felt each of us should go for medical examination. But that was a long time ago. We were told there was nothing wrong with both of us. Once we heard that, we just forgot about that aspect.

What is your advice to women waiting for some time to have children after marriage?

I encourage women who are passing through what I experienced to wait on God and not be troubled.  They should hold on to the word of God, because delay is not denial. One day, God would do it for them as He did it for me. I know that God is faithful and he will do what He’s promised to do to anybody. That’s my piece of advice to all women who are waiting on God for the fruit of the womb.