The story of Bettie Bee, a cat born with 2 faces and 3 eyes in South Africa on the 12th of December 2017 is getting global attention. 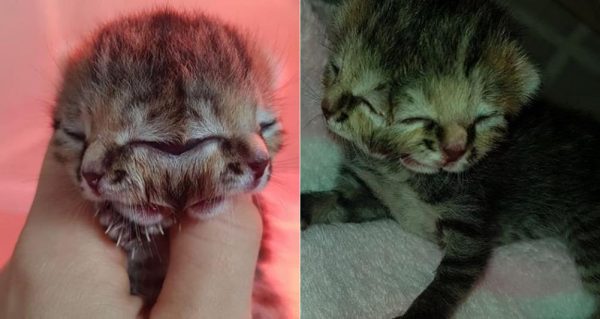 Born in Eastern Cape, South Africa, Bettie Bee was born alongside two other kittens, but her siblings were normal. It turned out that her double face made it difficult for her to nurse, which meant she was at risk of starving to death as at the time of her birth.

Her owner took it to a nearby cat rescuer who is known for taking in special needs cats. The rescuer, started tube-feeding the kitten. She said she could “feed either mouth, both are functional, both lead to the stomach.”

Because of the kitten’s uniqueness, the rescuer started a Facebook page for Bettie Bee with pictures and updates. The kitten appears to have a condition called craniofacial duplication, or diprosopus.

The latest update on the Cat’s official Facebook page reads;

‘Bettie Bee is an angel now. I took her to the Vet to let her go peacefully. I’m shattered. She was doing great until 2 days ago, she started with pneumonia, we suspect somehow some milk came up and went into her lungs, started with treatment immediately and thought we were winning until she vomited (probably nauseous from the antibiotics or mocus) and got more milk in her lungs, she was struggling and I said to myself from the beginning I would not let her suffer. For 16 days I gave my all and so did she, I would do it all over again, she deserved to have a chance at life but sadly it was not meant to be. Thank you so much for everyone’s love for her, kind words, prayers and encouragement. I will close this page down in a day or two.