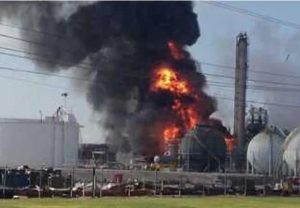 There was confusion in Delta State on Thursday after an  explosion affected the Nigeria Gas Company pipeline at the Ugbokodo community near the Warri Refinery in Okpe Local Government Area of Delta State.

The incident, which local community sources told our correspondent occurred at about 4am on Thursday, forced residents of the community to scamper for safety in the bush when they discovered that the raging inferno was advancing towards their homes.

It was gathered that some residents, including children, who fled into the bush following the raging fire were still missing as at about 4:30pm when our correspondent was leaving the community to file this report.

The PUNCH learnt that the explosion was as a result of leakages from a gas pipeline in the community, which the community had allegedly reported to the management of the Nigeria Gas Company.

It took the combined efforts of the men of the fire services from NGC, Warri Refinery and other agencies to put off the fire about at about 8am.

So far, the authorities have not said that any life was lost in the incident.

Residents of the community who later protested the development accused the management of NGC of negligence, claiming that the community had reported the malfunctioning pipeline to NGC’s Ekpan-Warri office at some point.

The protesters, led by the Unuevworo (traditional) of Ugbokodo community, Tobore Ajisha, alleged that the explosion could have been prevented if the leaking pipeline had been fixed when the community leaders reported the matter to NGC officials in writing.

Ajisha disclosed that the community had also placed a call to the management of Nigeria Gas Processing and Transporting Company when they noticed the explosion in the affected pipeline, but the NGPTC reportedly refused to act quickly until the fire gathered momentum.

He alleged further that two pipelines operated by the NGC in the community were currently ruptured, adding that they could result in further explosions in the community if they are not fixed.

“After the explosion, many of our residents who fled into the bush for safety have not been found.

“Some of them also sustained injuries from stampede that happened when everyone was scampering for safety. They have been taken for treatment.

“Our farms and fish boats were affected in the incident. We are appealing to the federal and state governments to wade into the issue.

“Before today’s (Thursday) explosion, we have written to NGC office here to intervene, but they didn’t listen to us. Now, see what their negligence has caused us,” Kenneth Etioyibo added.

Efforts to speak with the NGC’s spokesman in Warri area office, Violin Antaih, were unsuccessful ,as calls and SMS sent to him were neither answered nor replied.

But confirming the explosion, the Commander of the Joint Task Force, Operation Delta Safe, Rear Admiral Suleiman Apochi, said he had yet to get a full briefing about the development.