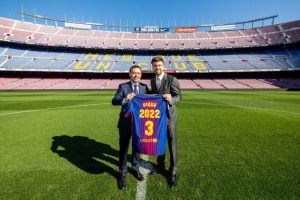 Barcelona defender Gerard Pique has signed a contract extension at the club until 2022.

His new contract has a buyout clause of €500m and it will see him beyond his 35th birthday at the club.

The new deal will also make it 14 years for Pique as a professional player with the first team having joined from Manchester United in a £5m deal in the summer of 2008.

On his new contract, the Spanish international defender said: “I am really happy to be celebrating my extension because this is my home and since my return, my desire has been to end my career here.”

Speaking about Pique signing a new deal at the club, Barcelona president Jose Maria Bartomeu said the deal to extend his contract was an easy one. He said: “It’s a special day, Gerard Piqué is an experienced player, a Barça fan from birth and let’s hope we can continue to keep winning trophies. The deal was an easy one.”

Pique while speaking further thanked the Board at the Club, his family and the coaching staff and players for helping him “wear the shirt of the club of my life.”

He said: “Barça is my home and I thank everyone who has made it possible to continue here.”