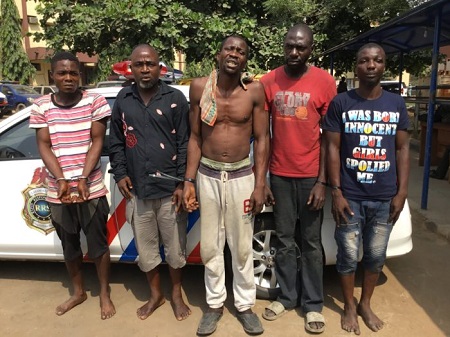 Operatives of the Rapid Response Squad, RRS, have arrested five suspected robbers in Lagos for allegedly robbing a 58-year old woman of her hand bag containing foreign and local currencies as well as other personal effects on New Year’s eve.

The suspects were alleged to have accosted their victim, simply identified as Alhaja around Ketu Bus Stop after alighting from a tricycle, at about 9:00 p.m. and dispossessed her of $800, 400 Qatari Riyald, N45,000, America Visa card, pouch containing gold trinkets valued at N110,000:00, a purse with unspecified amount and an Hawaii phone.

According to Alhaja, ‘I boarded a ‘keke’ (tricycle) going to Ketu Bus Stop after crossing from Motorways. I was going to Ikorodu after visiting my children.

“I got down close to Ketu Bridge on Ikorodu Road. I was the only one alighting as other passengers had gotten down before reaching the bus stop.

‘I was surrounded by five young men wielding knife and daggers. They collected my phone and hand bag containing $800, 400 Qatari Riyald, N45,000, America Visa card, pouch containing gold trinkets valued at N110,000:00 and a purse with unspecified amount’, she stated.

Alhaja further disclosed: “after collecting all I had on me. They were still using my line to call my husband that I should bring N25,000 to collect my phone and all they took from me. At a point, I had to block the line when the harassment was getting too much for me.”


She continued: “I reported the case at Ketu Police Station. I learnt it was referred to RRS. It was there that I was invited to come and identify them. I saw one of them, who gave his name as Shola.”


Shola in his confession to the police stated that the robbery was led by Sikiru, better known as Hauwa, whom police said was on the run.

Shola, according to sources was said to have sold the victim’s mobile phone to one Michael Ogunnaike who took the police to the suspect’s hideout in Ketu, Lagos.

About 13 suspects were reported to have been arrested in the hideout but five wete said to have been indicted by Shola of their involvement in the robbery.

Confirming the arrest, Lagos Police Public Relations Officer, SP Chike Oti stated that no criminal would go scot-free in Lagos, adding that the Commissioner for Police, Mr. Imohimi Edgal had ordered that the case be transferred to Federal State Anti-Robbery Squad,  FSAR for further investigations and arrest of those connected with the case.