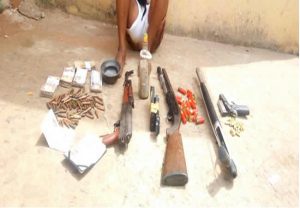 The operatives of Federal Special Anti Robbery Squad of the state Police Command have arrested another suspected “deadly member” of the gang.

The state commissioner of police, Chris Ezike, who addressed journalists on Monday in Owerri about what he called “massive breakthrough” for his command and the state, said the number of exhibits recovered from the suspect was mind-boggling.

The Police had, on Saturday, smashed a gang of six, but while three were arrested, the other three reportedly died during a shootout with the policemen.

The CP disclosed that the alleged kidnap kingpin, Uchechukwu Okoro, who was part of the gang, was rounded up through a coordinated operation led by the FSARS commander, Victor Geoffrey, a superintendent of Police.

Ezike, worried at the huge exhibits recovered from the suspect and the ones recovered from two of the three members arrested, Chidera Nzeagwu and Chinwendu Sylvester, during the Saturday gun battle, said the discovery “underscored the need for continuous mop up.”

The CP said, “On Sunday at Amafor at Ohaji/Egbema at 11:49pm, operatives of Federal Special Anti Robbery Squad of the Imo State Police Command, led by the commander, SP Victor Godfrey, arrested one Uchechukwu Okoro, 32, on a tip off intelligence in continuation of the deadly kidnap syndicate we overpowered on Saturday.

“On sighting my men, the hoodlums numbering more than 10 opened fire on the operatives but were repelled and the wanted suspect with bullet injury on right leg arrested.”

He said that two expended AK-47 ammunition was recovered from the scene.

According to the CP, the suspect had made a confessional statement that he used his family house at Isieke in Awo Ommam in the Oru East LGA as a detention facility until victims paid ransoms.