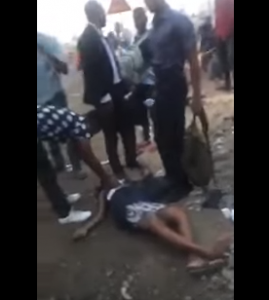 There was confusion and commotion in Oshodi Lagos after a Naval officer allegedly slapped a pregnant woman, sending her crashing to the floor.

The woman was seen lying on the floor as the Naval officer stood beside her looking confused as young men surrounded him and confronted him for slapping her.

One of the men eventually helped the pregnant woman sit up. The officer was almost attacked by the crowd but for his uniform.