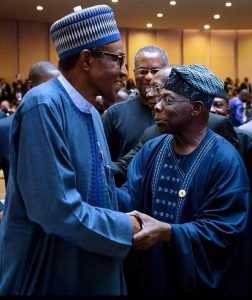 President Muhammadu Buhari and former President Olusegun Obasanjo met briefly on Sunday, just days after the open letter saga, in which Obasanjo asked the President not to re-contest in 2019.

The two leaders met at the opening session of the 30th African Union Summit in Addis Ababa, Ethiopia. On sighting Buhari at the venue, Obasanjo who ruled Nigeria as a democratically elected President between 1999 and 2007 approached the President and shook hands with him.

The two leaders exchanged pleasantries and engaged each other in a short discussion that lasted about two minutes. While the discussion was going on, a former military Head of State, Gen. Abdulsalami Abubakar (retd.), joined them.

The three of them thereafter posed for photographs. Both Buhari and Obasanjo are also retired generals.

Obasanjo had in a widely publicised press statement last week gave a damning verdict on the administration led by Buhari.

The former President while urging Buhari not to seek re-election also ruled out both the ruling All Progressives Congress and the main opposition party, the Peoples Democratic Party.

Obasanjo made a case for what is now known as “Third Force.” It is not certain that the issue of the press statement could have come up considering the brief nature of the leaders’ interaction.