Home General News When Is The Right Time To Introduce Bae To The Family?
Facebook
Twitter
WhatsApp 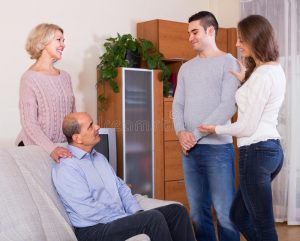 When is it meeting the parents of your boyfriend appropriate? I mean you don’t want to do it too soon. So, when is soon too soon? A lot of people fall in love and become a couple and it is in rare cases that the folks are either the cupids (the ones that introduced the couple). So, they’re there from the inception of the relationship. I have friends that their folks consider it an insult to bring a man into their house without him stating his intentions to the lady he’s dating. “My posy must not hear boyfriend. He wants me to bring fiance home” Tola says.

For other parents, they don’t mind being introduced to all the “boy friends” as long as they’re involved in their child’s lives. Ultimately, popsy and momsy will have to know about the romance, after all their blessings will be needed to reach the perfect climax to that union.

Funny enough, a lot of women believe that it depends on the traditional background of the guy in question. For example; The Igbo and Calabar guys will rather take their “final bus stop” to their parents than the flings or side chicks. But the Yoruba guys on the other hand do not mind taking all the babes (side chicks and all) to see the parents.

Stella 26 says “Its because the Igbo boys knows that once you show your mumsy the bride, it is straight to planning the wedding. And worst of all, the guys are gonna be the ones paying for the wedding“.

Chuka, says; “I actually do not think there is a rule to this, I will introduce my girl to the family only when I’m sure I”ll marry her.”

What do you think about this? Let us know your opinion.