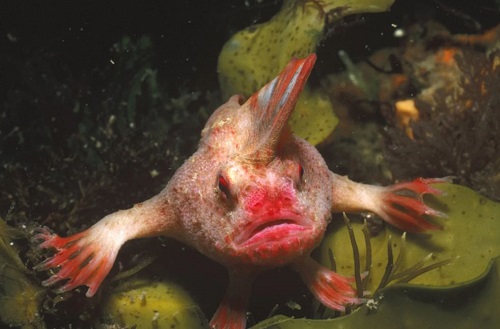 The discovery of a new group of weird fish — which sport bright-red, Mohawk-like fins on their head and finger-like fins on their sides to help them “walk” on the ocean floor — has delighted the divers who encountered them, just as they were trying to document the extremely endangered species.

Until now, scientists had known of only one population — that is, one group — of red handfish (Thymichthys politus, although it was formerly known as Brachionichthys politus). That group comprises between 20 and 40 individual fish that are living in Frederick Henry Bay, off the southeastern coast of the island of Tasmania, Australia.

Last week, divers from the Institute for Marine and Antarctic Studies (IMAS) and the citizen science project Reef Life Survey (RLS) encountered a new population, which also has between 20 and 40 of these bizarre, punkish-looking fish.

The newfound population lives a few miles away from the other one, but to protect the fish, researchers aren’t disclosing its exact location, according to a statement from the University of Tasmania. Each population lives in an area about the size of two tennis courts — a range that’s relatively small, because these relatively sedentary fish don’t swim; rather, they walk on the seafloor with their hand-like pectoral fins, the divers said.

“That second population’s just a huge relief,” Rick Stuart-Smith, an IMAS scientist and RLS co-founder, said in a video. “It effectively doubles how many we think there are left on the planet. But it also gives us hope that there may be other populations out there.”

There are about 10 known species of handfish, but little is known about their biology and behavior, according to the Australian government’s Department of the Environment and Heritage. These fish live in diverse habitats, ranging from shallow estuaries to deeper shelf waters. But researchers know the basic facts about T. politus. The roughly 5-inch-long (13.6 centimeters) fish is covered with small, close-set, flattened warts, and most of its scales and associated spines are fully embedded in its skin, according to an Australian government report.

Moreover, although T. politus was first collected in the 1800s, and later found again in 1950 and the 1980s and 1990s, “It appears that the red handfish has undergone a marked decline in both distribution and abundance,” with some underwater surveys void of any red handfish at all, the report said.

Habitat degradation is one of the major threats facing the species. Other threats include invasive species, pollution, siltation (in which fine particles are suspended in the water) and rising water temperatures (warm water doesn’t hold as much oxygen as cold water), the report said. Moreover, because the fish are so slow, illegal collectors can easily catch them.

What’s more, red handfish appear to sometimes lay their eggs on green algae. But finding the algae has become a challenge for the fish because the green aquatic plants are being eaten by Heliocidaris erythrogramma — a sea urchin that’s native to southeastern Tasmania whose numbers have spiked in recent years.

Given the red handfish’s low numbers, the newfound population is a welcome discovery, the divers said.

“Finding a new population that is definitely distinct from the existing one is very exciting,” Antonia Cooper, IMAS technical officer, said in the statement. “It means there’s potentially a bigger gene pool and also that there are potentially other populations out there that we’re yet to find.”